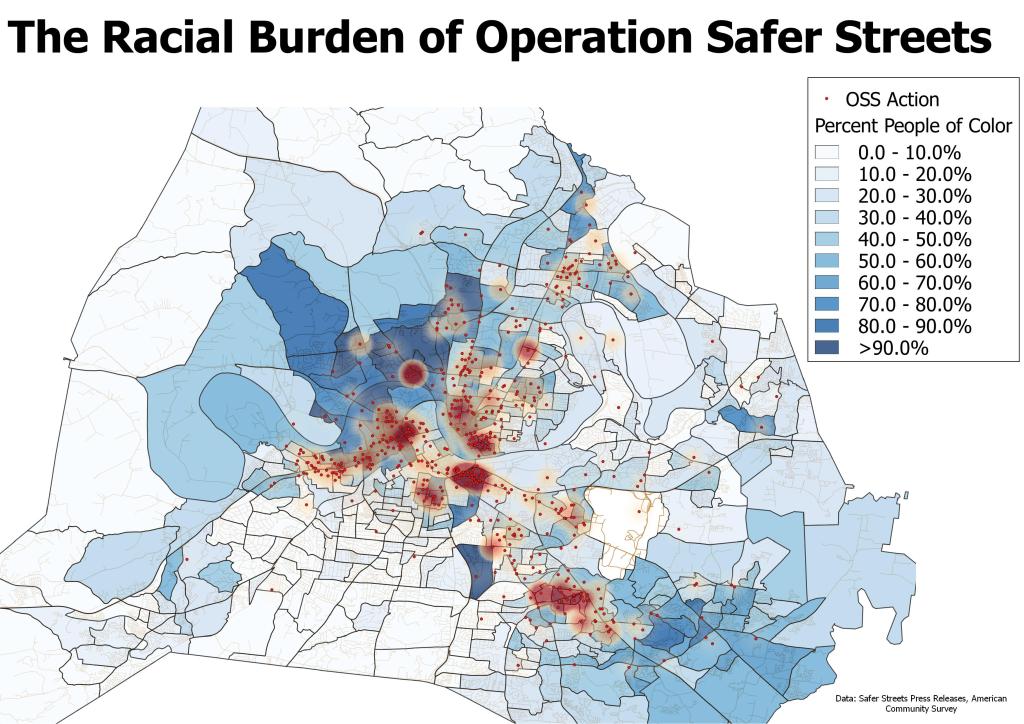 Operation Safer Streets (or OSS for short) has become the epicenter of Nashville’s debates over policing and racial justice. Every weekend, the MNPD funnels police officers to hotspots for gangs or crime, arguing that a visible police-presence deters crime. Since 2011, OSS has resulted in more than 5,000 arrests and 50,000 vehicle stops, according to WKLN.

MNPD touts OSS in regular press releases reporting the number of vehicle stops, arrests, and drug seizures they (in their words) “netted” each week. After extracting the text from these articles with some code, I identified which streets, blocks, and intersections have been targeted. [1]

And after looking at the numbers, what BLM and others have been saying is right: Nashville Safer Streets is not color-blind. Its burden falls disproportionately on communities of color.

In total, seventy-percent of Census Block Groups in Nashville are majority-white, according to the 5-year estimate of the American Community Survey. Yet 60% of areas targeted by Nashville Safer Streets were mostly non-white, and 25% of targeted areas were more than 90% non-white.

Plotting OSS actions alongside the racial composition of Nashville’s neighborhoods is striking. They are concentrated in three mostly black areas (North Nashville, the remaining black neighborhoods of East Nashville, and the Chestnut-Hill Area of South Nashville) and one mostly immigrant community (Antioch along Nolensville Pike). 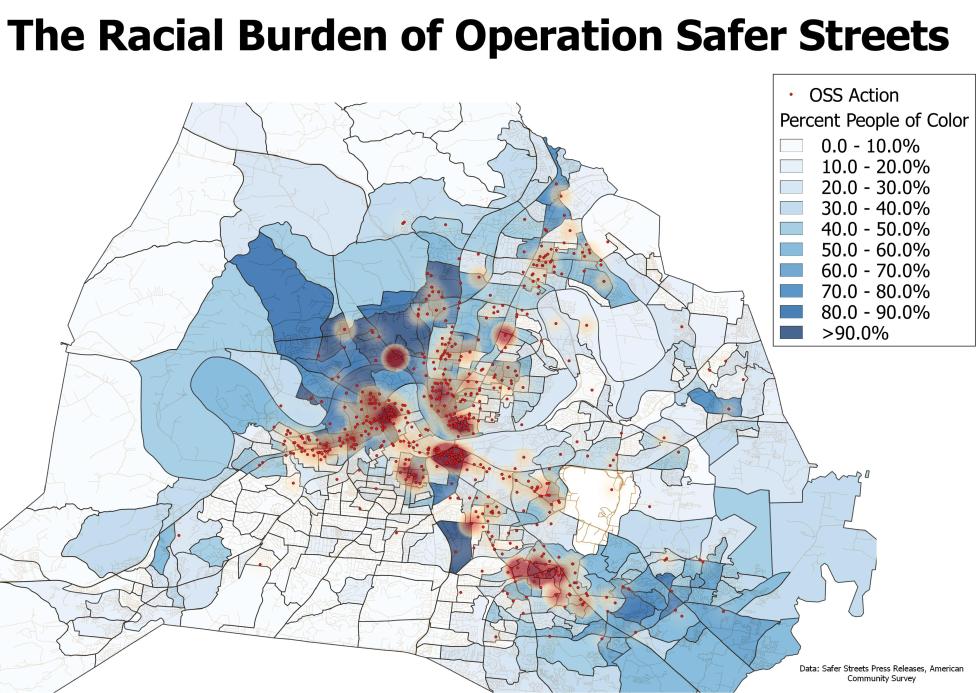 My experiences as a Vanderbilt student highlight this disparity. On the weekends, I saw plenty of drug use. But the police didn’t regularly stop our vehicles and search us on the weekends, like they do in low-income, predominantly non-white neighborhoods.

And I’m glad they didn’t. Because plenty of us, who are now going to graduate school or law school or working good jobs, would have had our future prospects shattered if drug use was treated the same way on Greek Row as Lafayette Street, which has been targeted 77 times in the last few years by OSS.

The traditional response from the Police is that they target these predominantly black and low-income areas because they are known to be hubs of “gang-activity.”  But this is self-fulfilling. If police systematically stop cars in poor neighborhoods, that is where they will find cars with drugs.

At the end of the day, the question is, does Operation Safer Streets actually make us safer? I don’t think it does. OSS neglects the root causes of gang violence. It extracts tax revenue from the poorest neighborhoods in the form of citations and court fees. And it subjects tens of thousands of Nashvillians to arbitrary stops, undermining trust in law enforcement and, as recent events have shown, opening the door to a potentially violent encounter with law enforcement.

After all, what starts with a traffic stop ends too-often with a dead black man.

This post was picked up by the Sunlight Foundation and also helped inform Finding #9 in Gideon Army’s excellent “Driving While Black” report.

[1] I converted each street to a latitude-longitude coordinate that represents its central location, using the Google Maps API. (I deleted from this data some streets like Old Hickory Boulevard and Dickerson Pike that were too vague to make any real inferences about where police activity occurred.) Next I matched each of these areas with its Census Block Group (the smallest Census area with data, comprising, on average, about 2000 people) to see whether non-white communities were disproportionately affected.